Yesterday was not such a good day!

I could have called this post “Hydrangeas, Whiplash and Childhood Beds” but that would be getting a bit repetitive and boring as my last post was a mix of words like that.  So I went with a more dramatic title which of course will draw millions of people to my blog to find out WHY yesterday was not such a good day!   No?  😉

Yesterday started out ok.  I had an appointment in the morning and so went to that and then came home and did some general domestic tidying and such and had some lunch.  My daughter was starting a new job on this day which will be at all sorts of different locations.  Yesterday’s location was at a suburb about a 20-30 minute drive from here.  I told her that I’d drive her and pick her up so that we were both familiar with the location and could then feel better about her driving there herself next time.  She only just recently got her driver’s licence.

So I’d dropped MissM at her work location and decided that rather than go all the way home (only to have to be back in 2 hours), I’d go half way home and look around some shops until it was time to head back to get her.  I went to Pet Barn and found dog bedding on sale so bought a new mattress for the dog crate and a new bed for the dogs to lie on in our family room.  I then went and checked out lighting at Beacon Lighting – just coz I love lighting!  Then I decided to go to Bunnings for a loo stop and a coffee.  Of course when I walked in … I was stopped in my tracks by this beautiful display…..

…..gorgeous Hydrangea’s!!!  I must confess though, that this photo was taken after the BEST four hydrangea plants had been nabbed by me and safely nestled on a quickly obtained trolley 🙂   I could not resist!  I still have heaps of empty spaces in my new front garden and I have always had a soft spot for Hydrangeas.  I know just the perfect spot for them.

So, after the unexpected nabbing of four beautiful Hydrangea plants, I went to the ladies loo and then stopped at the cafe for a coffee.  Finally, it was time to get moving.  I paid for my plants, loaded them lovingly onto the back seat of my car – to keep the new pet beds company and set off to pick up MissM.

I was sitting at the exit from Bunnings – at Cannon Hill for those Brisbane people familiar with the area – waiting for a break in traffic to turn into Creek Road.  The car in front of me had gone.  I inched forward and stopped to survey the situation.  The oncoming traffic was too close for me to pull out, so my foot was on the brake waiting for the next break in traffic.  Next thing I know – it felt like a SEMI-TRAILER slammed into the back of me!  In actual fact, a 4WD slammed into the back of me.  She thought I’d taken off with the car in front of me and wasn’t looking.  Not sure how fast she was going but the impact was intense.

I think I sat there for a while in a bit of shock, trying to absorb what had just happened.  I noticed I had broken a nail (horror of horrors!!).  I also noticed that my neck and back were hurting.   I recognised that I was a bit ‘shook up’.  I had thoughts of concern for my newly purchased Hydrangea’s.  Then I thought – OMG how bad is the car?!  Finally it registered that perhaps I should reverse my car over to the side and get it out of the way.  I noticed that the 4WD driver had pulled over.  We exchanged details.  She admitted she was at fault.  My car had lots of damage to the back-end.  Her car had no damage.  She had three kids in her car who found the whole thing very exciting.  One of her little boys picked up a bit of my back left hand tail light off the ground and asked if he could keep it.  “Sure mate, you can have it” I said.  They were cute kids – they kept apologising for the damage to my car and teasing their mother that she would have to tell their father.

When I first got out of my car and approached the driver of the 4WD I felt anger….but then I tried to be more ‘mindful’ and think of how awful the whole thing would be for her too.  I’m glad I managed to do this as our conversation was amicable and pleasant and though she kept apologising to me, I told her “not to worry – these things happen – the  main thing is that everyone is ok”.

So after exchanging details etc and being reassured by a few people that my car looked safe enough to drive, I went and picked up my daughter and then came home.  While I was waiting for my daughter, I phoned my husband to fill him in on what had happened.

Here are some phone snaps of my car when I got home.

(Notice the hydrangea’s still on the back seat!  It’s a miracle that the glass didn’t break/shatter in the rear window!) 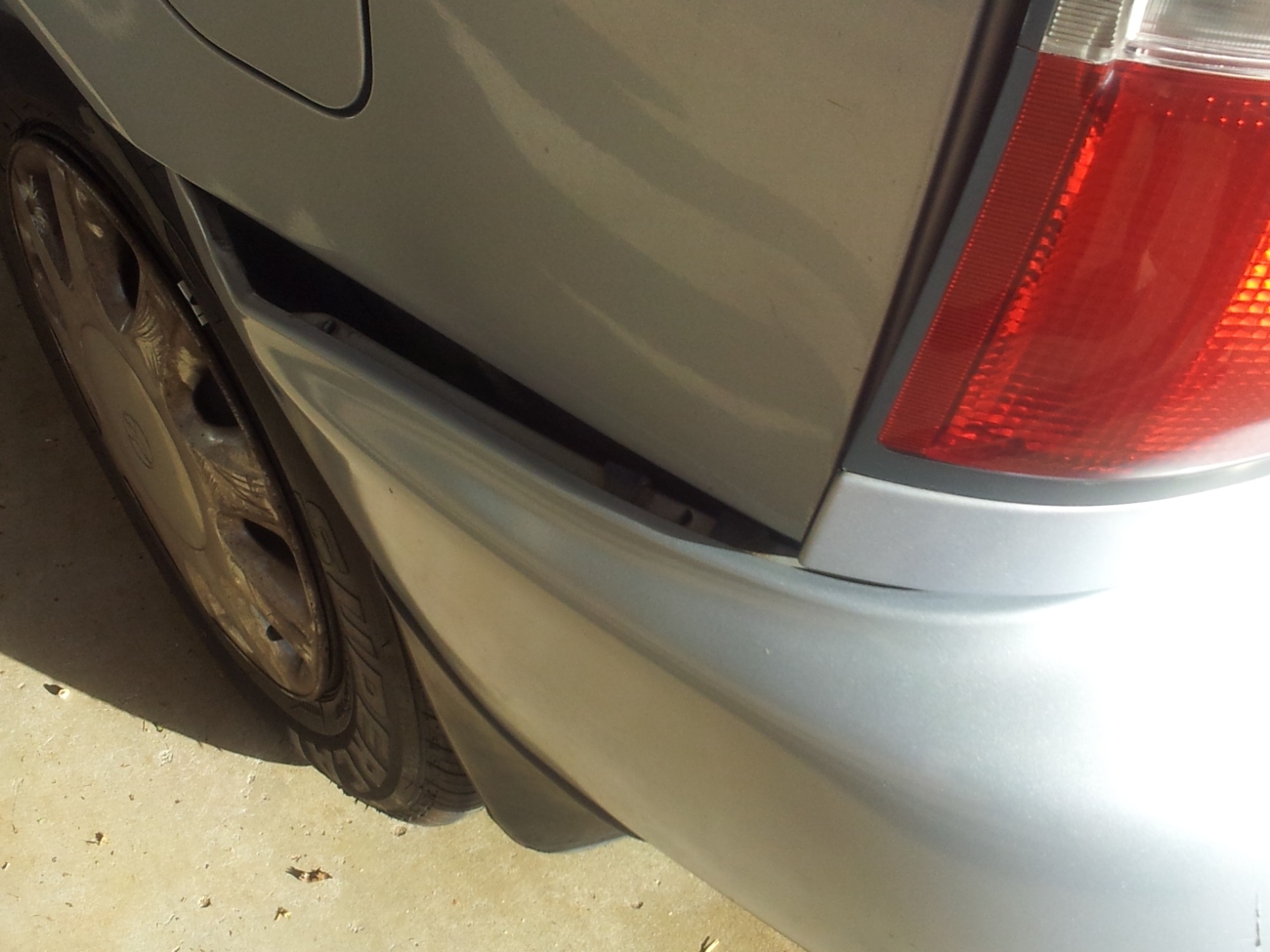 I purchased this car from my sister when she upgraded a few years back.  This car was going to be purchased (at family rates) by my daughter and I was going to get a new car (not a brand new car).  I drive the family’s 2nd car – the 4 cylinder fuel-efficient general get about car.  It doesn’t look like this plan is going happen now.  We’ve been told that it is highly likely the car will be written off.  The damage doesn’t look all that extensive but considering the car would not be valued above $4,000 – the cost for repairs will far exceed the value of the car.  So sad – it was such a great car!!  Just got a brand new battery, brand new tires *sigh*.

I went to the physio this morning and had a nice massage.  I have to go have an x-ray of my neck – just to be sure no damage.  In case you were worried about my broken fingernail – it sadly had to be amputated … but I have moved on from this and will be just fine!  😉  On a positive note – I’m now perusing the internet for a new car for ME.  My daughter may have to wait longer than expected to get her own car.  She will need to start saving!

So I thought I’d end this post with something pretty after those awful car photo’s.  This is where I would have liked to go after the accident.  I’d have liked to crawl up onto this bed and have my mother fuss over me.  Here are some snaps of my childhood bed and room that I took last weekend when I stayed the night there (as explained in THIS post).

This is my childhood bed.
The decor has changed a bit since when I was little but this is the same bed
I slept in all those years ago and it is in the exact same position as it was then.

I shared a room with my sister.
She slept in her old bed and I slept in mine.
She hadn’t made her bed yet *tsk tsk*!!

So the rest of my week has got to better has it not?  I hope you all have a fabulous week!

Linking up today with With Some Grace’s #FYBF